I’m noticing a certain kind of shape around me at the moment – for the past few days I’ve been spotting curls and twists, exposed I suppose by the bare branches of winter.

One that I notice daily is the contorted hazel (Corylus avellana ‘Contorta’) which is right outside our back door.  This large shrub is also known as a twisted or corkscrew hazel and by the nickname of ‘Harry Lauder’s walking stick’, after a Scottish entertainer who apparently used to carry a walking stick made from a branch of the shrub.

Only a couple of days ago I was listening to a podcast of Gardener’s Question Time and this plant came up – one of the panellists revealed that the twisted hazel was first discovered by a drunken vicar, who fell into a hedge, looked up and saw the contorted stems.  So he took a cutting, grew the plant and that’s how it’s ended up in many of our gardens (according to Chris Beardshaw!).

It’s a fascinating shrub to look at, but especially in winter, when you can see the exposed shapes of the branches, and then in spring when little yellow catkins appear.  Even its leaves are quite bumpy and textured so it’s well worth having one in the garden for year-round interest.  You can even bring it indoors – sort of.  I’ve pruned a few branches from mine as each year it throws up a few vertically, which is out of keeping with its general weeping shape; so I’ve put the pruned shoots into glass vases so I can admire the twists and turns inside as well as out.

And now it appears I’m being followed by twisted branches… on a visit to the hospital last week to donate blood I noticed a twisted hazel in one of the flower beds in the grounds. 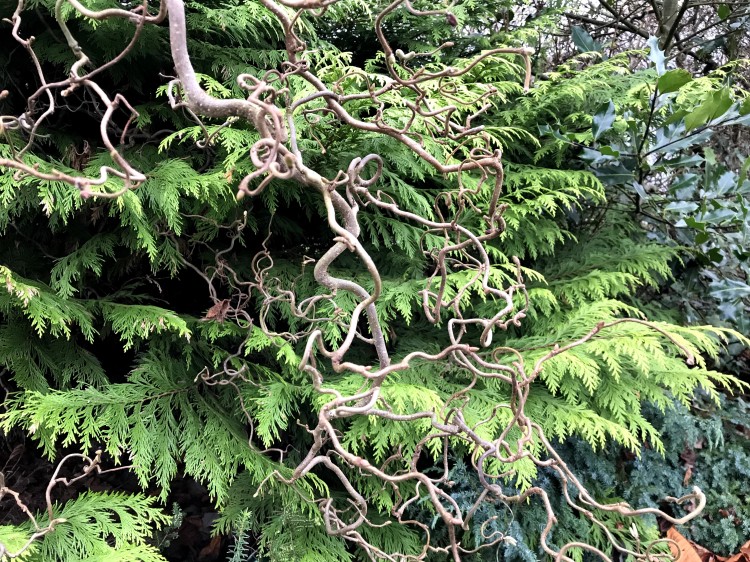 It looks quite good with the background of the brighter green conifer.

Then on a walk around the village a few days later, I looked up and noticed these striking trees in someone’s garden:

I’m not certain if these are hazel or not – I expect this is the ‘tree’ version of my medium-sized shrub.   I couldn’t get close enough to check but they make a fantastic silhouette against the winter sky.

Finally, one of my favourite little plants in my garden, this little grass…

…which is Carex comans ‘Frosted Curls’ and provides a wee corner of interest in its spot in the front garden all year round.  At this time of year its little curls bounce around in the wind and towards the end of last summer it provided a brilliant backdrop for the chocolate cosmos I planted next to it.

So there you have it, everything’s a bit twirly at the moment and I like it.  Nature really doesn’t do straight lines and what’s more interesting for your winter garden than a twisty, turny, curly, wurly plant to make you stop and look for a while…