Actually I’m really quite pleased to have been in the garden at all – it’s been ages.  Pre-Christmas, Christmas and post-Christmas did not leave much time to get outside and tackle winter gardening jobs, and when there was a bit of spare time the ground was so hard and frosted there wasn’t much point!

This was an early birthday present to myself – a bargain in the Black Friday sales.  It’s currently warming up some astrantia and echinacea seeds – fingers crossed it will do the trick.

Anyway, back to the monkey puzzle.  Moving it is Step 1 of my grand plan for the front garden, which I am attempting to totally redesign.  Previously shrubby and a bit, well, boring, I have already begun removing the most dull/old/overgrown shrubs and last year managed to introduce a few perennials.  This year I will be moving a few plants around, and planting as many perennials as I can get my hands on.   More on the Grand Plan in a later post – back to Step 1.

I wanted to move the monkey puzzle as I had put it to the front corner of the garden after we moved in here.  We acquired it when my youngest daughter was just a few days old so it’s almost 8 now.  It’s done fine and is gradually getting bigger (they grow very slowly for the first 5-10 years) but the branches are growing towards one direction, a bit like arms which are stretching towards you for a hug…but this would be a very bad idea as it’s incredibly prickly.  I think this is because the trees behind are shading it and it’s been growing in the direction it gets most sunlight (west).  So I’m hoping that moving it into the middle will enable it to get a more even tan, so to speak, and might help it to rebalance its direction of growth.

I was a bit nervous about moving a tree which is about seven years old and had been in its current position for about three years, but when I came across Rachel the Gardeners post on this here I was reassured that, with a bit of care, it should survive the transplanting process.  So I dug carefully around it, lifted it with as many roots intact as possible and replaced it into the nice deep hole I dug in the centre* of the front garden.

*Please note my entirely UNscientific method of measuring the centre: pace lengthways across the garden and pace the breadth.  Then take half the number of paces each way and you’re in the middle.  Simples.  I don’t really do measuring. 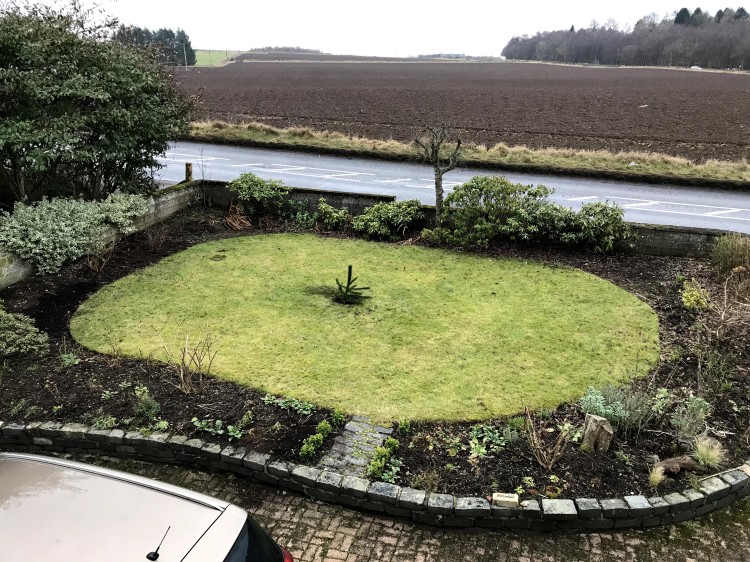 I really like it there – it seems to change the whole nature of the front garden.  I guess it’s the addition of a focal point.  So I’m hoping that I can nurture it into its new home and that it will continue to grow and thrive, and that in years to come I can give people directions to my home by telling them ‘we’re the first house as you enter the village – you can’t miss us as there’s a massive monkey puzzle tree slap bang in the middle of the front garden.’

Now for the botanical bit…

Monkey puzzle (Araucaria araucana) originates in Chile, South America and came to Britain in the 1800s.  Its common name derives from this time, when it was very rare to see one.  Apparently Sir William Molesworth, who owned a young specimen at Pencarrow garden in Cornwall was showing it to a friend who remarked “It would puzzle a monkey to climb that”.  The name has stuck – as has the novelty of seeing one in someone’s garden and my own children frequently enjoying shouting ‘MONKEY PUZZLE’ at the top of their voices when we pass one.

Trees can grow more than 12 metres tall, although it will take at least 20 years for it to reach its full height.  They usually bear either male or female cones, although it won’t produce seeds until it is at least 30-40 years old.  It’s thought they can live up to 1000 years.

2 thoughts on “Monkeying around…”