Happy Easter!  I hope your Easter weekend was filled with happy and peaceful times, as well as chocolate eggs 🙂

I have eggs of another kind on my mind at the moment, because for the past couple of weeks I have spotted a blackbird making a nest in our garden.  She’s borrowing the top of a robin nesting box which we put up a couple of springs ago, not long after we moved in here.  Robins have so far never used it, but apparently it makes the base of a very good, if somewhat messy, blackbird nest!  I haven’t seen her there for a few days, and was beginning to think they’d given up on it, but this morning the female was back with a beakful of dry grass and old leaves and disappeared into the hole in the ivy, adding a bit more to her presumably cosy little structure.  I have also discovered it’s VERY difficult to take a photo of her doing this!  But here’s a pic of her tail disappearing into the undergrowth…

There must be all sorts of materials in there – you can clearly see a large piece of lacecap hydrangea and a bit of a fir branch hanging out of the nest.  I do wonder if she’s nearly finished it – apparently blackbirds take around two weeks to build a nest.  It’s usually made of grass, straw, twigs and other plant material (clearly!) and they may use it to raise two or three broods.

The site is just opposite one of our kitchen windows, and pretty close to the back door of the house.  I put the nest box there purposefully as I thought if it ever gets used we’ll have a great view of what’s going on – but I’m hoping they don’t abandon it at any point because of us coming and going nearby.  I’m really very excited about this nest!  A little blackbird family could be living, literally, right on our doorstep.  I’m looking forward to watching their progress. 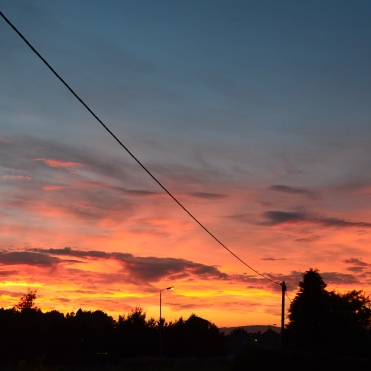 These could be the pair in question – but it’s hard to tell because there are quite a number of blackbirds present in our garden at the moment.  Sometimes it’s like Blackbird Wars out there as territorial males chase each other about!

We have also had a new visitor lately – a jackdaw, which comes down and nicks scraps from the tall bird table, occasionally visiting the feeders.  It’s only recently when I saw this one that I noticed what striking eyes they have – so pale against the dark feathers.  They’re really quite handsome birds.  Here’s our new pal…

It’s not the best shot of him – I’ll keep trying!